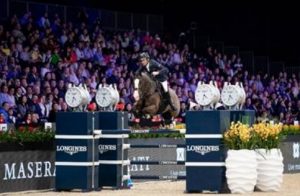 Hong Kong (Hong Kong SAR China) – February 18, 2019 (travelindex.com) – Three days of action brought with them a life’s worth of memories as the curtain came down on the Asian stage of the Longines Masters Paris – Hong Kong – New York intercontinental series today. More than 35,000 people gathered across the three days of this year’s Longines Masters of Hong Kong.

Fittingly, the final day was graced by Hong Kong Chief Executive Carrie Lam Cheng Yuet-ngor, who met the riders and presented the Longines Grand Prix of Hong Kong trophy. Longines Ambassador of Elegance, horse lover and entertainment super star Aaron Kwok was also on hand for the final press conference and to share his thoughts on the sport he loves so dearly – and like one of his live shows, the thrills came from start to glorious finish. The action began with The HKJC Asian Junior Grand Prix, excitement rose with the staging of the DBS Trophy, and then came the event everyone had been waiting for all week – the Longines Grand Prix of Hong Kong. And the premier event brought out the very best from Denis Lynch on Chablis as the Irish rider and his stable newcomer flew around the course. It proved a fitting way to end a fabulous week – and now it’s on to American stage in New York, which among other things will feature the rematch of the Riders Masters Cup, from 25 to 28 April 2019.

The glory on this final day came with the Longines Grand Prix of Hong Kong and a stunning effort from Denis Lynch on Chablis as they finished in front of Simon Delestre on Uccello de Will. But there was so much more also on offer all day.

It began – at 9.30am – with The HKJC Asian Junior Grand Prix, an initiative from partners EEM, The Hong Kong Jockey Club and the Hong Kong Equestrian Federation that showcased the rising stars of Asian showjumping. It was Hong Kong’s Vincent Zi-Xiang Capol on It’s A Gamble who lit up the main arena on the day, capturing the title after a two-round competition with jump heights raised from 1.00m to 1.10m.

Next – at 12pm – came the DBS Trophy, a one-round competition that set riders a simple task. On paper at least. To win you had to be the fastest from eight riders to complete a clear round – and on this day the fastest was Roger Yves Bost on Castleforbes Talitha.

Then it was time for the ultimate event at the world’s ultimate show jumping series. The Longines Grand Prix tests the world’s best against jumps at Olympic height heights of 1.60m, and it provides a true test of technique, of skill and of bravery from both rider and horse.

In the end it came down to a ride for the ages from Denis Lynch on Chablis, as they cleared all the fences over two rounds. Second place went to Simon Delestre on Uccello de Will – the only other pair to clear all the fences. Along with the US$400,000 in price money the Paris, Hong Kong and New York Longines Grand Prix offers something very special – a Super Grand Slam Bonus of €2,250,000 rewarding a victory in each round of the Series in the same season and a €1,000,000 additional bonus for three successive victories at The Longines Grand Prix straddling two Longines Masters seasons. Irishman Lynch will now head to New York for the next leg in April with that huge bonus in his sights.

While the show jumping action kept fans glued to their seats all day long, there was plenty more to entertain in the main arena. Presented by MGM, equine artists Frédéric Pignon and Magali Delgado and their Iberian horses continued to leave the audience spellbound with dazzling shows combining music, dance and multi-media. Then there was the appearance of the “golden girl” of the HKJC Equestrian Team as Jacqueline Siu celebrated her history making gold medal performance at last year’s Asian Games with a dressage performance the relived the glory.

Reflections on three days of fun and fanfare

Over three days – and nights – the Prestige Village came alive, allowing visitors to indulge and be entertained thanks to fabulous collaborations with the Longines Masters of Hong Kong’s partners and exhibitors.

Among the many and varied highlights were the first staging of the Asian Hobby Horse Competition and the wild after party hosted by DJ Henri PFR, while visitors were able to immerse themselves in luxury offering from a wide array of brands, while being tempted by gastronomic delights. While visitors were treated to the latest from the likes of Title Partner Longines, Kingsland, Fieldstone, Horse Pilot, Equicty, Hermès Sellier, Asia Marine, Baccarat, Lightfoot Travel, Robert Mark Safaris, KEF, La Mod and Maserati. There were also themed gifts and novelties inside the Longines Masters Boutique, one lucky guest walked away with a trip (flight and accommodation) to New York to visit the Macey & Sons Gallery and the Longines Masters of New York in April 2019, courtesy of Macey & Sons Gallery.

Dedicated to promoting equestrian sports on an international scale as well as making a difference by contributing to socially constructive causes, Longines Masters series organizers EEM this year chose to support deprived children around the globe, especially in Hong Kong and China. The Hong Kong leg of the intercontinental show jumping event joined hands with the Sole Beneficiary Charity Partner, Save the Children Hong Kong, with parts of the net proceeds generated from the charity auction lunch, various VIP Hospitality Experiences in a specific period of time and kids’ activities in Prestige Village donated to sustain these marginalized children’s ongoing education, health, protection and emergency relief programs.

“The Longines Masters of Hong Kong delivered its promise and concluded with a spectacular showcase of the best of show jumping with the victory of Denis Lynch. More than ever Hong Kong is confirming its status of Asia’s equestrian capital as more than 35,000 visitors, from Hong Kong, Asia and the rest of world gathered over the last three days in celebration of horses Thanks to all our wonderful partners and the public, our event has become a not-to-be-missed meeting point for corporates, professional, and families alike. Now our Series continues its journey and will settle on the American continent for the Longines Masters of New York, which will take place from 25 to 28 April, 2019” concludes Christophe Ameeuw, CEO of EEM and Founder of the Longines Masters series.

About EEM
With a passion for equestrian sports, Christophe Ameeuw–—CEO of EEM and Founder of the Longines Masters Series Paris-Hong Kong-New York–—created the Ecuriesd’Ecaussinnes in 1997. Based in Belgium, the stables today enjoy an international reputation for trading competition horses, for high-end breeding, and for an academy that provides access to the best in equestrian training. The organization, as well as the reinvention of show jumping competitions, is the challenge that Christophe Ameeuw and his team have set for themselves. The company has developed by creating the “Masters” concept, which brings together under one roof the best of show jumping, entertainment and lifestyle experience. After the successes of the Audi Masters in Brussels and the Gucci Paris Masters, EEM has added to its prestigious profile of events a new iconic competition, one of the most prestigious equestrian events in the world, the Longines Masters series on three continents in Paris, Hong Kong and New York. Inspired by the legendary tournaments of the tennis Grand Slam, EEM has created in a single package the “Grand Slam of Indoor Show Jumping”, recognized by the FEI, which is the ultimate

On the Asian continent, meanwhile, there is the Asia Horse Week, a real meeting point for the international equestrian community in Asia, which was created during the Longines Masters in Hong Kong, thus demonstrating EEM’s desire to develop the international sector in the Asia-Pacific region.

With the desire to bring equestrian sports to the forefront and make them accessible to all, EEM in 2017 launched EEM.tv, a new digital TV channel that allows you to follow EEM events worldwide live, free of charge, and in full.

About Longines
Based in Saint-Imier, Switzerland, since 1832, the watchmaking expertise of Longines reflects a strong devotion to tradition, elegance and performance. Longines has generations of experience as the official timekeeper for world championships and as a partner of international sports federations. Over the years, Longines has forged solid and lasting ties with the sports world. Known for the elegance of its timepieces, Longines is a member of Swatch Group Ltd., the world’s leading manufacturer of timekeeping products. Featuring the winged hourglass as its emblem, the brand operates in more than 150 countries.