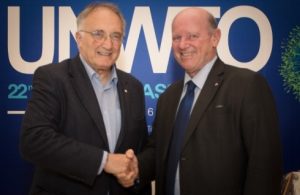 “Recent devastation in the Caribbean and the spectre of a US reversal on Paris are game changing events” Lipman warned.

He said “the 2015 Paris Accord is a vital core component of the massive, sustained response needed to deal with the scale, scope, unpredictability and intensity of natural forces, if scientific analysis of climate change is right.

Lipman called on the Travel & Tourism sector to rally behind the Paris process and resist the challenges posed by the Trump Administration’s vacillation on its support of the Agreement.

Speaking under the theme “How relevant is Sustainable Tourism to Climate Change?”, Lipman described the urgent need to plan for increasing tourist numbers in a world where the effects of climate change have direct impact on destinations, especially small island economies.

He stressed that Small Island Developing States, (SIDS), like Seychelles, as the most evidently at risk, had played a key role in the processes leading up to Paris and applauded their continuing advocacy leadership.

The Seychelles has taken significant strides through the establishment of the Seychelles National Climate Change Strategy (2009), six years before the Paris climate Agreement. It had also developed its own Green Label initiative and similar environmental actions. Now it’s time to up the game. This is increasingly important as we see the effects of climate change unfold in the form of hurricanes, flooding and heatwaves on a scale that has never been seen before.

Lipman said that SUNx – Strong Universal Network – is designed to help. It is inspired by the late Maurice Strong; who led many historical sustainability initiatives, including the 1992 Rio Earth Summit and Agenda 21 implementation framework. He saw clearly the potential of travel & tourism in the long path to sustainable development, laid out in the new SDG and Paris Climate Frameworks, with measurable multi-decade timeframes.