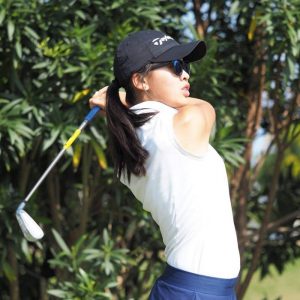 Hua Hin (Thailand) – April 30, 2017 (travelindex.com) – Rising teen-star Victoria Tip-Aucha will create history when she tees it up at the MahaSamutr Masters, sponsored by MahaSamutr Country Club Hua Hin, in Thailand on Tuesday, May 2, becoming the first woman play on the MENA Tour.

Born and brought up in the United States, the 15-year-old Victoria, of Thai heritage, has her game trending in the right direction following a string of firsts in the junior golf circuits both in the US and Thailand that have set optimistic wheels spinning.

With all the hype swirling around her participation, how she would stack up against stronger players under pressure will be one of the most appealing storylines of the tournament, but she remains unruffled and wants to savour every moment to the full.

“This is a new challenge for me and I love challenges because they offer me an opportunity to grow in some way and stretch my creative muscles. Really looking forward to it,” said in-form Victoria, who has already won five times on the Thailand girls golf circuit this year, including wins at the International School Junior Golf Tournament and ASB Eagle Cup.

“I’m grateful to MahaSamutr Country Club for inviting me to compete in this year’s MahaSamutr Masters at Banyan Golf Club. I truly value their gesture. I’m not playing to prove anything, but just loved the idea of playing in a men’s event. Simple as that.

“I hope the experience of playing alongside MENA Tour players will stand me good stead and that will be the biggest takeaway from the tournament,” said Victoria, whose achievements on the other side of the Atlantic include victories at the 47th VSGA (Virginia State Golf Association) Championship and the Junior All-Star at Chantilly National, both in 2016.

“Obviously, my immediate goal is to post a strong finish, but I can’t really control all of it. What I can control is how hard I try and what I can do. What I can do is to have fun out there and just play the best I can,” she added.

There is no rule against women playing in men’s tour events, but only a few, including Annika Sorenstam, Michelle Wie and Lexi Thompson have attempted the feat since Babe Didrikson Zaharaias, the first woman to play against men in a PGA Tour event in 1938.

“We are really delighted to have Victoria join our tournament. She is charismatic, she is skillful and her presence will keep the atmosphere buzzing,” said Veeranat Limprasutr, Head of Business Development and Director of Operations at MahaSamutr Country Club in Hua Hin.

“Golf is a game you play against yourself, so it’s going to be a Victoria vs Victoria show in her quest to improve and test her abilities. If you look at her achievements, it’s so impressive. Our invitation is a step in the process of making her a better player,” he added.

Commented Mohamed Juma Buamaim, chairman of the MENA Tour: “It’s indeed ground-breaking for the Tour as Victoria is making her first foray into a men’s event. She is a special talent, one who combines feminine grace with power and technique, making her a suitable candidate for a strong ambassador for the future of women’s golf.

“I wish her the very best and, like every one, we will be watching her progress during the tournament with keen interest. We just want her to play well and enjoy every moment,” he said.The MahaSamutr Masters, part of a three-event Thailand swing of the MENA Tour, gets under way from May 2 to 4, featuring a strong field.

An initiative of the Sheikh Maktoum Golf Foundation, the MENA Golf Tour was created in 2011 with the aim of developing golf in the region. It is affiliated to R&A, the worldwide golf governing body based in the home of golf, St Andrews, and the Arab Golf Federation and enjoys the Official World Golf Ranking (OWGR) status.

A guaranteed spot on the PGA Tour’s 2018 DEAN & DELUCA Invitational (for the MENA Tour champion), multiple European Tour starts, including the Omega Dubai Desert Classic, the Hassan II Trophy, Maybank Championship Malaysia, and the KLM Open, are some of the added incentives that await MENA Tour members, in addition to playing privileges on the Sunshine Tour, and exemptions into the Final Stage of the Sunshine Tour and Asian Tour Q-Schools.