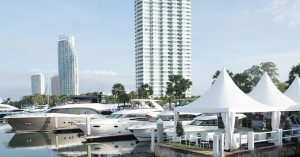 Pattaya (Thailand) – July 31, 2017 (travelindex.com) – The Thai Government is driving ahead with its Eastern Economic Corridor (EEC) plans to develop Thailand’s Gulf region into a key business and leisure hub. With expansion of U-Tapao Rayong-Pattaya International Airport and high speed rail linking Don Muang, Suvarnabhumi and U-Tapao airports already approved, an additional 230 billion baht has been approved for the third phase of the Laem Chabang deep-sea port, the third phase of the Map Ta Phut deep-sea port and a double-track rail network linking Laem Chabang, Map Ta Phut and Sattahip deep-sea ports, all of which will drive marine tourism in the East of Thailand.

Speaking of the growing importance of Thailand’s East and its geographical importance in the region, Mr. Scott Finsten, Harbour Master of Ocean Marina Yacht Club, said, “The Gulf of Thailand has tremendous natural assets, both offshore and on, and it’s encouraging to see the region getting priority attention from the Thai Government. Not only is Thailand’s East seeing significant government investment but private investment is also increasing. This brings further development of the leisure infrastructure and with Ocean Marina Yacht Club – the largest marina in South East Asia – and Ocean Marina Pattaya Boat Show, we are positioned to support this growth.”

Billed as ‘Thailand’s Biggest Outdoor Lifestyle Boat Show’, the 2017 Ocean Marina Pattaya Boat Show retains its premier position in the global marine events calendar kicking off the Asian boat show season from 23 – 26 November. Organised by and hosted at Ocean Marina Yacht Club in Pattaya, the event has established itself as the place to do business for the regional marine industry with more than 150 businesses expected to showcase their products and services to an ever-growing number of people with an interest in the marine lifestyle.

“I am pleased to announce that we will be hosting the Ocean Marina Pattaya Boat Show for the sixth year from 23 – 26 November at Ocean Marina Yacht Club. Our objective has been clear from day one; that the event be a strategic growth driver for the regional marine industry. The event attracts a growing number of visitor nationalities to experience the best of marine tourism in the East of Thailand each year and this year we aim to grow on our past five years of success. The onshore and in-water displays will be bigger than ever and there will be lots of activities and fun for everyone from the serious boat buyer to the family member who wants to get a glimpse of the marine lifestyle on offer,” commented Mr. Finsten.

Ocean Marina Pattaya Boat Show generates a minimum of two billion baht annually for the marine and tourism industry in the East through trade at the show and business stimulated throughout the year.

“We have a track record of boat and product sales at the show since we started. But what’s even more important than this are the leads made and the deals and transactions that take place after the show. The event provides a marketing platform and opportunity for interested visitors to see what’s on offer from the industry, and with our close proximity to Bangkok we see many city residents make appointments to come back in the weeks and months after the show for private viewings and sea trials, which leads to more sales,” added Mr. Finsten. “With the EEC gaining momentum and investment pouring into the East coast, marine tourism is set to boom over the coming years.”

About Ocean Marina (a prestigious project by Ocean Property)
Situated on Jomtien Beach in Greater Pattaya, Ocean Marina is Thailand’s premier marina resort complex and the largest in South East Asia, a short drive from Bangkok and just one hour from Suvarnabhumi Airport. The world-class marina is complemented by a yacht club, accommodation, fine dining and recreational facilities as well as two luxury residences – San Marino and Ocean Portofino.

Ocean Marina is home to the annual Ocean Marina Pattaya Boat Show and Top of the Gulf Regatta – Asia’s largest multi-class regatta – and has been the official venue for leading international events, including CataWorld Cup, 24th SEA Games, as well as large-scale concerts by Grammy, Cool FM and more.