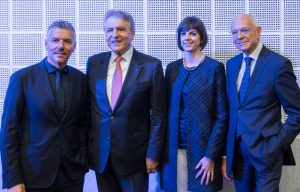 Basel (Switzerland) – March 22, 2017 (travelindex.com) – The 100th Edition of the one unmissable trendsetting show that unites key players from all sectors of the global watch and jewellery industry and sets the tone for the coming year, Baselworld 2017, commenced this morning with its inaugural press conference. As every year, the eagerly awaited start of a new edition of the most unique annual event for the entire industry was witnessed by the most important international press representatives from print, television and digital media and by many thousands around the world who followed the press conference via the livestream.

Mr René Kamm, CEO of the MCH Group, opened the event by welcoming all present to the 100th anniversary edition of Baselworld. He went to mention that the show has been a part of the MCH group’s journey from the outset and that historically speaking from an international perspective, “Baselworld has undoubtedly contributed significantly to our group’s success and global standing.”

Ms Sylvie Ritter, Managing Director Baselworld, welcomed all the media representatives present at the press conference and all the journalists following on the livestream, to this year’s 100th Anniversary Edition of Baselworld. Ms Ritter remarked that “for the last 100 years, watchmakers and jewellers have been presenting their creations to visitors of Switzerland and the world in the heart of Basel,” and that this special edition celebrates a century of “Baselworld being an essential date in the industry’s calendar and that each new edition is eagerly anticipated, often with great impatience.” Remarking on the sizeable press turnout and ongoing interest in Baselworld, Ms Ritter emphasised that their “presence here in such large numbers is testimony to the high-level of interest you bring to this show.”

She continued with a reflection of the past 100 years and presented a short review of some of the major milestones along the show’s development path, concluding that, “this brief retrospective demonstrates one thing: by forward thinking in Basel, we have built the world’s most important watch and jewellery show.”

Regarding the reasons for the show’s success, Ms Ritter underlined that it was because “we have succeeded in reinventing, renewing, adapting, modernizing and continuously transforming ourselves, constantly reflecting an ever-changing market.” She insisted that, “this is what we will continue to do” because “looking to the future is our vocation!”

On that note, Ms Ritter addressed the past 12 months, and acknowledged awareness that these times “have been difficult and have compelled some players to leave the watch and jewellery industry. In the light of this context, it is essential that the exhibition concept is adapted once again and Baselworld transformed to reflect the global market.” In addition, she pointed out that, “this process of transformation will always have to favour quality over quantity. The result being that we chose to refuse some exhibitors for this year’s show and this is a choice, this is our choice.”

Ms Ritter drove home Baselworld’s concept that, “the very essence of a show is to reflect the market, to meet the expectations of its various players and therefore to be continually changing. Baselworld has never been static and will never stand still!” She went on to demonstrate exactly how this change process and market adjustment is being implemented by unveiling the new concepts. “New adaptations have allowed us to offer the independent watchmakers, previously in the Palace, a space of first choice in Hall 1. The creation of this space, called ‘Les Ateliers’, has enabled us to meet the growing demand in this sector.” She then revealed news of another novelty in Hall 1 called the ‘Design Lab’. “This space is dedicated to designers, mainly in jewellery, featuring unique innovative pieces and avant-garde creations.”

Ms Ritter praised the press for playing a critical role in maintaining Baselworld’s premier position. She underlined that news of all the latest collections will be relayed around the world minute by minute, and thanked all the media representatives for creating such an incredible global Baselworld impact.

Mr Eric Bertrand, President of the Exhibitors’ Committee, extended a warm welcome to Baselworld 2017 to all present on behalf of the exhibitors he represents. “Year after year, Baselworld resonates throughout the world and is of great importance for the industry as well as for Switzerland and the city of Basel,” said Mr Bertrand. He summed up the value of the show, saying that “it is here and nowhere else that all the exhibitors have the opportunity to present their innovations and creations to the most influential and eminent retailers and media around the world.” Over and above that, “we know from experience that the new collections presented as a world premiere at Baselworld will make the news for the next 12 months and that the trends that emerge here will spread throughout the world.” On the topic of Baselworld’s history, Mr Bertrand noted that “this show demonstrates that Baselworld has constantly adapted to the context in perpetual mutations and transformations. To achieve this, Baselworld has not only made significant changes but has always been proactive in reflecting the market. This envied status as a global platform only gets stronger when all players are looking for secure values and stability. The essence of Baselworld is to reflect the entire world watch and jewellery market and reflect it at its best.”

Mr Bertrand also addressed the current economic and geopolitical situation and is of the opinion that these times offer “an opportunity for those who have done their job properly in recent years and who have a solid foundation on the market.” He said that in the past he was surprised by the enthusiasm for watches by the brands that were foreign to the industry, adding that, “when unfavourable winds blow, then cold reality strikes”. It is therefore no wonder that “some of them have had to backtrack, whereas those brands that have stayed focused and relied on their know-how are still present.” The upshot of this is a consolidation of the market that will benefit the entire branch once the recovery has begun. And Mr Bertrand is confident that “this recovery will enable the best-armed players to gain market share and be more successful than ever before. And, as the President of the Exhibitors’ Committee, I am firmly convinced that Baselworld should and will continue to reflect the market and remain true to its strategy of favouring quality over quantity.”

As a logical consequence, those brands that had invested in watchmaking without real legitimacy, and who are no longer here today, have freed-up space. “We can now host ‘Les Ateliers’ Hall 1, a location that perfectly matches the independent watchmakers who are an integral part of this industry,” said Mr Bertrand, adding that “I am very proud that this new space was born under my presidency.” By way of conclusion, he underlined his commitment to the show, saying, “throughout the year, I maintain an ongoing dialogue with the management of Baselworld, and I will make a point of maintaining the quality of the show, its attractiveness and its influence worldwide.”

Mr François Thiébaud, President of the Swiss Exhibitors’ Committee, rounded-off the press conference by highlighting the fact that for eight days a year Baselworld adorns time. Commenting on the results of Swiss watch exports, Mr Thiébaud noted that in 2016, Swiss watch exports were 9.88% lower than in the previous year. He pointed out that the last quarter of 2016 saw a slight improvement and recalled that the global political and economic context remained difficult and that watch exports had also been penalized by the valuation of the Swiss franc since the decision of the Swiss National Bank on 15 January 2015.

Mr. Thiébaud reminded the audience that in terms of value, the Swiss watch industry remains the world’s largest exporter. Referring to Baselworld, Mr. Thiébaud commended the history and development of the show where beauty and innovation are in the service of time. He underlined the important evolution of Baselworld over the last 100 years by recollecting that at the first show in 1917, only 29 Swiss brands exhibited, whereas in 2017, 220 Swiss brands will be showcasing their novelties.