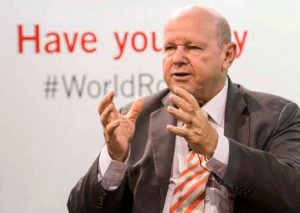 Victoria, Mahe (Seychelles) – May 17, 2017 (travelindex.com) – Sharing the views of so many who have followed the story of the last UNWTO elections is now difficult because of the emotions that these elections have brought to the surface. The best candidates seen as people with solutions versus the political contract and contacts in the global tourism industry are questions that remain difficult to understand. The situation seems to me vaguely like the story of the blind and elephant in the tales of a thousand nights and nights?

Is it conceivable that the Secretary General of the World Tourism Organization, the body which is responsible for the continued development of this industry at the level of the countries of the world is from the outside of the sector. He came as the wild card at the same time that the world is preaching in the need for specialization. The world is also talking of encouraging and respecting disciplines in all fields, but following the 12 May in Madrid things are not like the past, putting the wrong man in an inappropriate place is like forcing square pegs in round holes and round pegs in square holes…

This is exactly what the world was hoping to get rid of the repercussions of the current position of the secretary general of the World Tourism Organization from all the limbs of the mighty industry promising a dazzling future for more than half of the world in .the next 20 years.

Today as Editor of this tourism and travel portal news I would like to do a “let’s understand or let’s just chat”, who is now saying that the elected ambassador of Georgia has nothing to do with tourism, yet he is chosen as the General Secretary of the World Tourism Organization. Where are the controls and conditions that determine this?

Is it conceivable that the highest position in the world in the tourism industry will be incomplete without a capable and knowledgeable Secretary General. To nominate any person who has no relation from afar or close to the global tourism industry is also a let down people are saying?

What about this letter of sanction, which has not been confirmed by the African Union presidency sent to the State of Seychelles? Will an investigation be opened within the African Union for the alleged letter?

What is the situation the head of State of Seychelles and his Council of Ministers face now after the frustration created by them acting on a questionable letter of sanction?

Why is not a public opinion devoted to the elections committee of the World Tourism Organization (WTO) to be adopted by the member states to accept a single condition that the applicants should work in the field of tourism rather than outside it?

If it is proved that the African Union sanction letter was the reason for the elimination of the Seychelles candidate from the elections in the last minute …! Is it possible for Seychelles to apply for a new re-election, especially since there is an opportunity until next September?

These are just remarks that the Secretary General of the World Tourism Organization (WTO) should answer … on the one hand, and the head of State of Seychelles on the other?

It was for me and so many around the world sad to see the best candidate humiliated by his country as he was only because of a letter that seems of not to have come from the African Union hierarchy or not. At the May elections Africa pulled, through all the pressure and such intimidation as that famous letter of sanction, only the ten African votes and ONE. Only one vote at the first round from the world. This result speaks for itself.