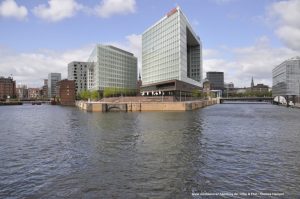 Launched in 2001 and held every two years, the GIJC 2019 is set to attract more than 1000 journalists from around 100 countries to Hamburg. The conference will be split across two central locations: Der Spiegel publishing house and the Hafen City University Hamburg. These new riverside venues are located in Hafen City, Europe’s largest inner-city development combining modern architecture with historical UNESCO sites.

The GIJN is an international association of non-profit organisations that support, promote, and produce investigative journalism. Members chose Hamburg as the host city at the 10th Global Investigative Journalism Conference in Johannesburg in November this year.

A delighted Dr. Carsten Brosda, Hamburg’s Senator for Culture and Media, explains: “Critical journalism is coming under more and more pressure worldwide. A free society needs critical journalism. The media city of Hamburg does not call itself the Free and Hanseatic City by coincidence. In these difficult times, we are therefore proud to welcome investigative journalists from all the world to GIJC 2019 in Hamburg.”

Julia Stein, CEO of Netzwerk Recherche, the leading network of investigative reporters in Germany, and member of the Global Investigative Journalism Network’s Board of Directors, added: “We are really delighted that members of the Global Network have expressed their trust in us. Together with our partners, we‘re beginning two exciting years of work.”

Hamburg is the hub of investigative journalism in Germany and home to well-known and respected newspapers and magazines including Der Spiegel, Die Zeit and Stern. Hamburg-based media houses include Norddeutscher Rundfunk (Northern German Broadcasting, NDR) and Gruner + Jahr, both long-time partners and hosts of Netzwerk Recherche events.

The Hamburg Convention Bureau (HCB):
A direct subsidiary of Hamburg Marketing GmbH, the mission of Hamburg Convention Bureau GmbH (HCB) is to deliver locational expertise in combination with major know-how in the area of B2B events such as conventions and conferences including large events in public spaces. The Bureau is in charge of global marketing for Hamburg as a congress and convention site, and tasked in parallel with heightening the Hanseatic city’s international profile by hosting public events with powerful visual impact.