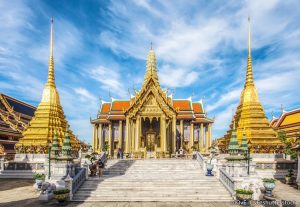 Bangkok (Thailand) – November 23, 2016 (travelindex.com) – The Bureau of the Royal Household has announced that Bangkok’s Grand Palace is to be closed for two days from 1 to 2 December, 2016, while Royal Merit Making ceremonies take place to mark the first 50 days since the passing of His Majesty King Bhumibol Adulyadej.

During this two-day period, the selling of tickets to allow tourists to visit the Grand Palace will be suspended during these temporary closures. In addition, there will be no access for tourists or mourners wishing to pay tribute to the Royal Remains.

In addition, on 5 December, which marks the birthday of the late King, another Royal Merit Making ceremony will be held at the Grand Palace. Hence, the attraction will be closed to tourists from 5 to 6 December. However, visitors wishing to pay their respects to His Majesty on these two days can still do so at the Dusit Maha Prasart Throne Hall in the Grand Palace.

Tourists can continue to visit other temples and attractions in Bangkok’s Rattanakosin area which are all open to visitors as usual.